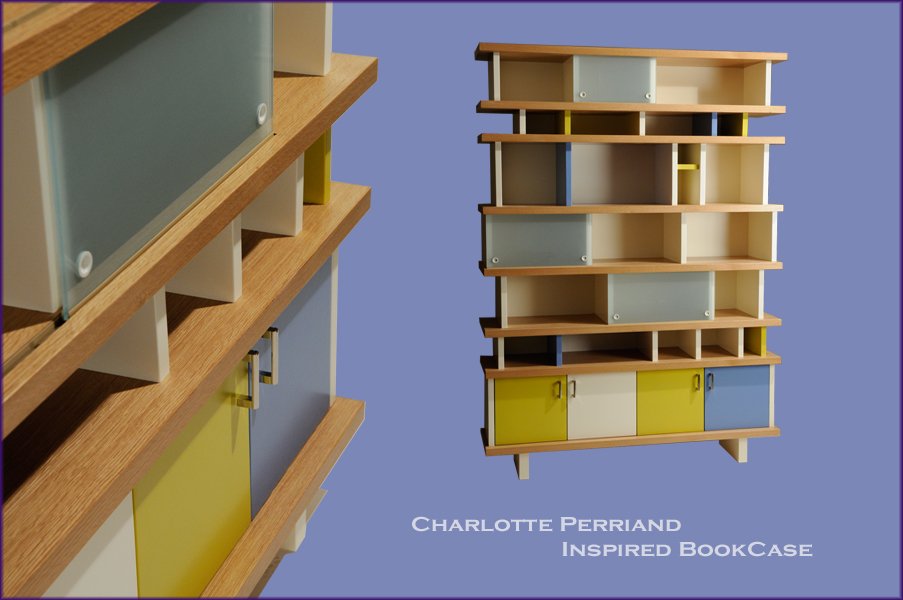 Several years ago, a client of mine from West Palm Beach, Florida asked me to design a whimsical bookcase for his new residence. He was very much enamored with the work of French designer/architect Charlotte Perriand, whose aim was to create functional living spaces. In doing so, she believed that better design would lead to a better society. So I began to explore her work and saw how she playfully incorporated color into her pieces, which is what my client was seeking.

With her work in mind, I asked my client how large a bookcase he would like, if he had any color preferences, and if there were any treasures that he wanted to display. We were both set on using rift white oak for the horizontal shelves, but wanted the vertical supports to be done in an off-white lacquer. The accent colors for the doors and small partitions would come later.

I began by presenting a bunch of drawings showing different shelving and door layouts, trying to see which might appeal. A dozen or so drawings later, we had our general shape – a floor to ceiling bookcase. Being that it was a sizable piece, I quickly realized that it would have to breakdown into three pieces for shipping. Once I determined the connection points, I made several suggestions as to where the sliding glass doors might be located. We went back and forth a few times on this detail, but eventually finalized the layout and color scheme.

Building and Finishing the Bookcase

I began by building the the horizontal shelves, each of which consisted of two layers of three quarter inch thick material. This double layer feature was a key component on how the bookcase was assembled. Most of the shelves would be glued together, making solid slabs. Though the two shelves were the piece separated, were treated differently. The top layer received a finished edge on all sides and appeared to be one and a half inches thick, while the bottom layer became slightly smaller and remained a separate piece. The seams between each were neatly hidden where no one would see them.

Then the vertical partitions were cut from one inch thick material and finished on all sides. The top and bottom edges of each were modified to fit snuggly into channels cut into the horizontal shelves. This made the piece easy to re-assemble once the finishing was done.

The most challenging aspect of this project was neatly installing the rolling track for the sliding glass panels; each of which contained a small set of ball bearings for smooth fingertip control. The sand blasted glass panels were drilled for their handles, slid into position for fitting, and then removed for shipping. As were the cabinet doors.

Once all of the pieces were finished with clear or colored lacquer, I assembled the bookcase in horizontal layers, discretely hiding my screws, and then gluing two or three layers together to create the top, middle and bottom sections. Kinda like a three layer cake.

It was very satisfying seeing this piece come together. And from what I heard, assembly on the other end was pretty easy. The client was very happy. That’s nice to hear.