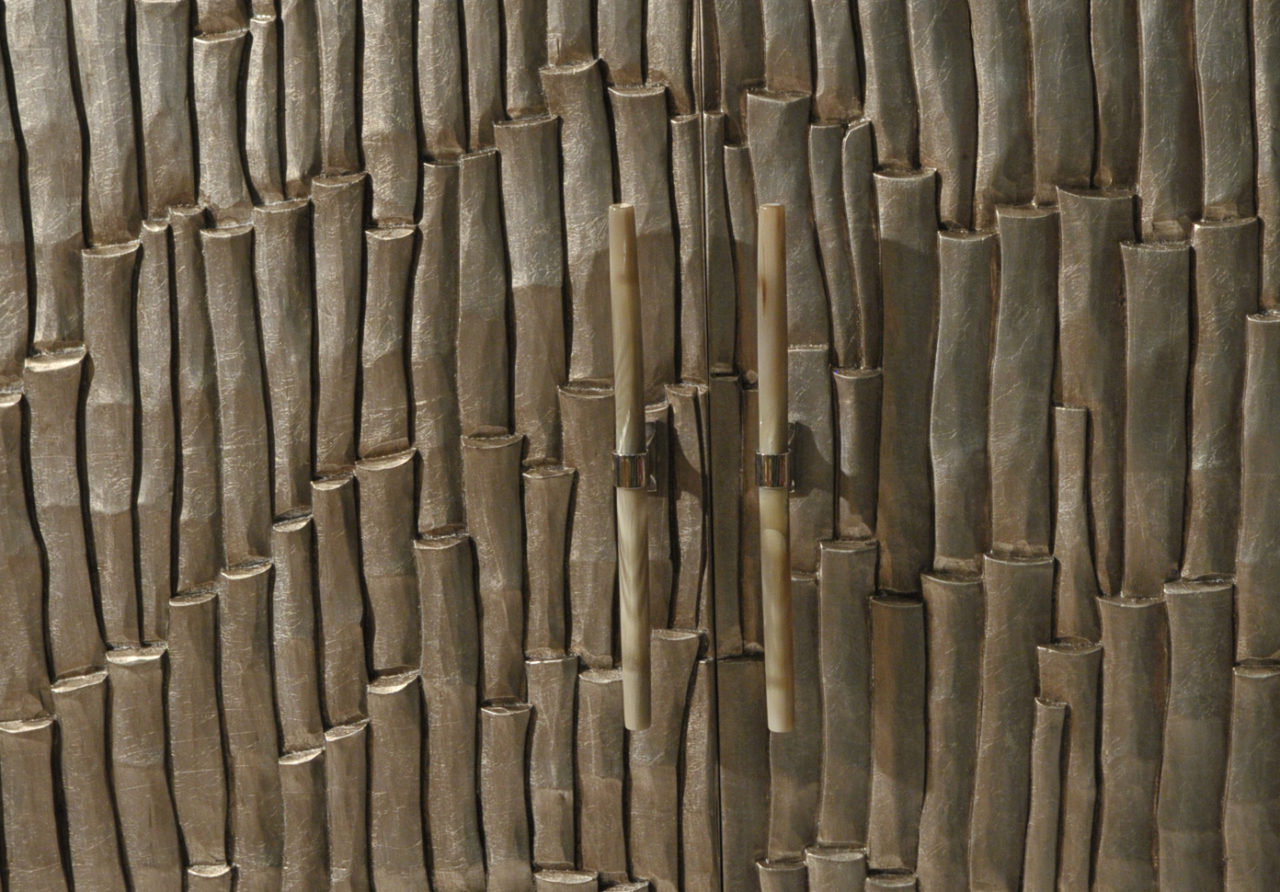 One of my long time designer friends, Trisha Reger http://TrishaReger.com, asked me to build an armoire for her client who lives high above the treetops overlooking the Central Park reservoir. Apparently this person needed a place to hid her paperwork, yet have something elegant to go with the other attractive furnishings in her lofty penthouse. The space is beautiful with windows on all sides and a color scheme based on muted grays and khaki greens. So, as you can imagine, my piece had to follow suit.

The door design came from someone else, yet I was asked to compose and build this piece according to the client’s needs. Trisha presented me with preliminary drawings, which I looked over and soon realized that this armoire was too large for the service elevator. It would have to arrive in pieces. So my first challenge was building with this in mind. My second challenge was incorporating the pocket doors into the layout without making the piece too deep. So I did a series of CAD drawings and sent them off for review.

Material Selection for the Armoire

At the same time, Trisha showed me a small sample of wood she wanted to use for the main body of the piece. I didn’t recognize it, so I showed my veneer man who identified it as dyed Koto. Koto is typically a blond wood, but apparently the Italians have figure out a dying process which gives us wood jockeys a whole host of color options. This one is almost silver and when it’s clear coated, has a shimmer akin to Mahogany.

The inspiration for the doors came from another source and Trisha’s capable assistant had someone else carve them. I simply provided the dimensions. While the doors were being worked on, I needed to find the appropriate pocket door system that could handle the weight of these large doors. Thankfully the Hefele catalog had an option made by Hawa and I found them to be really well made. Pricy, yet worth the money.

When the doors arrived in my shop, I discovered that they had been made out of basswood, not soft white maple as requested. Basswood is easily carved, but too soft and won’t hold a screw for very long when mounted. In time, the doors would loosen and eventually fall off. So I bought this to Trisha’s attention and suggested installing steel plates where the hinges mounted. By doing so, metal screws could be used instead and I could be confident that they wouldn’t pull out. This trick has worked every time.

But before building anything, I had to ask my veneer man to laminate a whole bunch of different size panels with the Koto. Four large ones for the internal and external walls, some smaller ones for the drawer fronts, shelving, cabinet back, etc. and a bunch of loose material for veneering the edges. So when it came time to assemble the piece, it was done inside out. I started with the base, then added the internal door partitions, the work surface and horizontal members, the doors and finally the exterior side panels. It went together pretty much like an erector set.

The interesting thing about the pocket door hardware was that it was designed to be attached to the internal sidewalls. Usually, they go on the outer ones. This actually helped, because it allowed me to make adjustments to the doors before attaching the exterior side panels, which were simply cosmetic.

After a few hours of unwrapping and onsite assembly, the piece was ready for use. I later found out that the client was very happy with the piece.