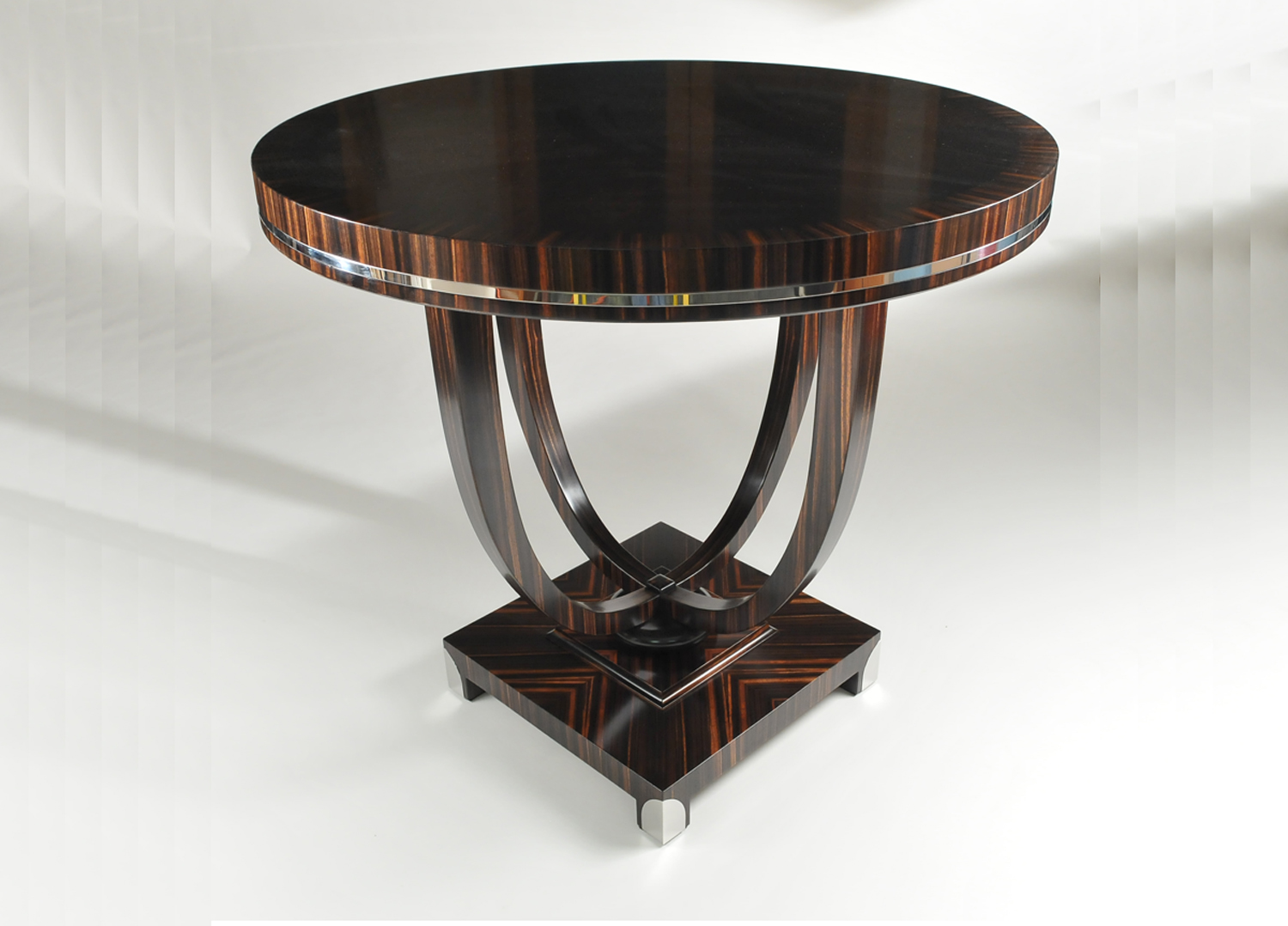 I built this foyer table several years ago and had a blast doing it! The client who hired me lives on Park Avenue in Manhattan and together we came up with the design for this table. Basically, I designed and she approved. We’ve collaborated on many pieces over the years, including her dining room table which appeared in Architectural Digest (May 2011). I’ve also created more than a dozen pieces for her father and brother as well.

Composition of the Foyer Table

As for this table, the center of the top was done in quartered Black Walnut, but all the “striped” edges were done in Macassar Ebony. As with most of my custom projects, I asked my supplier in Queens to veneer all of the flat surfaces in their large press. I, on the other hand, was responsible for applying the veneer to the curved legs and the edges of the top and base. It seems like I’m the only one in the Hudson Valley willing to tackle these irregular shapes using my vacuum press. It’s very satisfying seeing the results.

I’m also especially proud of the legs, for they were carefully constructed. The cores of each were made of poplar which was laminated to ensure strength. Most tables aren’t made this way. Each leg was tapered by placed in an adjustable steel jig that I designed for my router. The edges of each were notched and a small 1/4″ x 1/4″ strip of solid ebony was glued in place prior to veneering. The veneer was added and then the edges were rounded slightly without revealing the blond poplar beneath. It’s a trick I’ve used before and it has worked well.

Each leg is independent of the others and is bolted through a doughnut of solid ebony into the base below for a strong connection. The table is quite stable.

Reason for the Bling

As you may have noticed, I added some polished stainless steel features to the table. The band wrapping the top sits in a shallow channel which had to be carefully done. One slip with the router and all would be lost. The base also received some interesting corner caps. My intent was to unify the piece by adding some metal at the base, but I also wanted to protect the corners from aggressive house keepers and their dust mops. The table is beautiful on its own, but the metal adds an extra element of interest.

Once all the woodworking was done, I had to finish the piece. The ebony was clear coated, but the walnut was carefully stained a darker brown. I didn’t want the dark stain to bleed into the ebony, so it took a steady hand. Then the entire piece was then finished using a polyester/poly-urethane combination. This is the only clear coat finish for ebony that will stand the test of time.