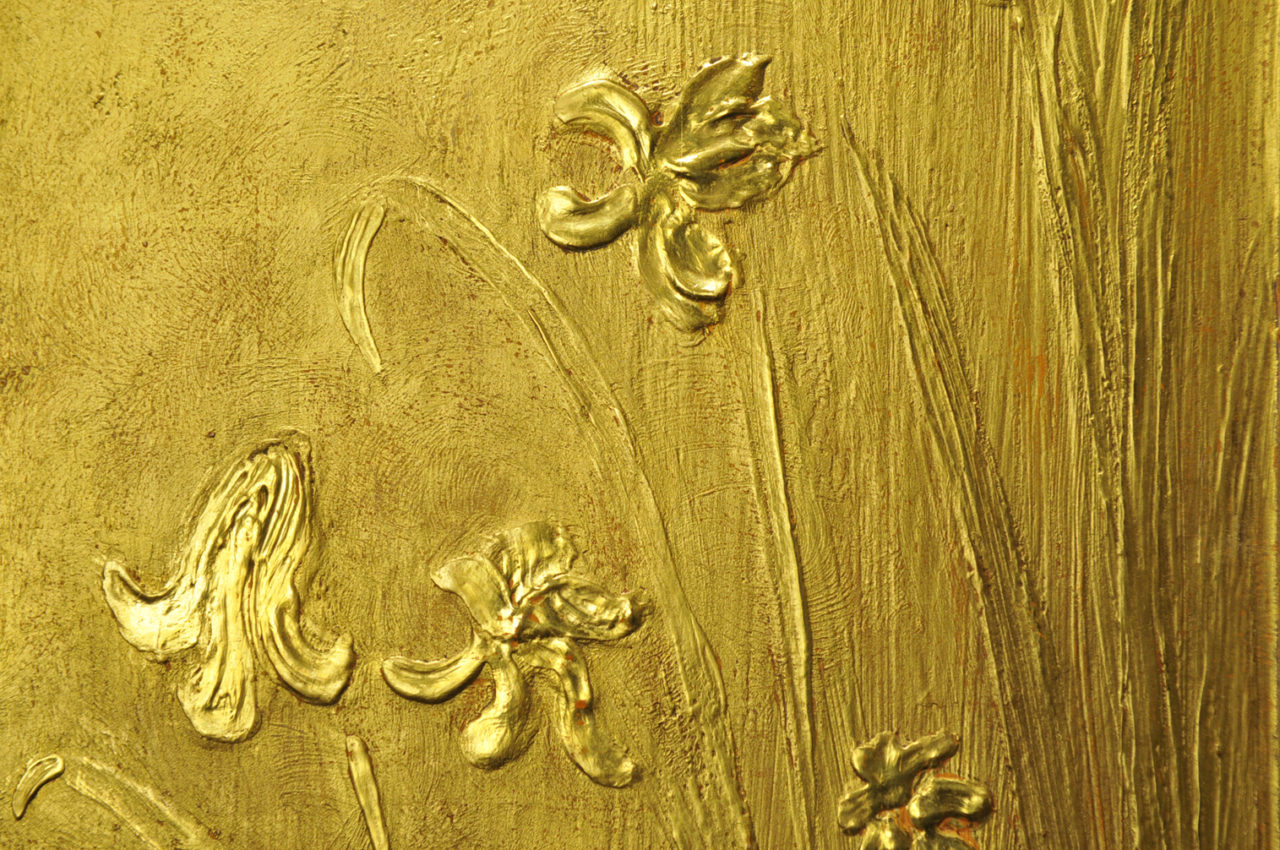 Some Thoughts About Frames

“What is the roll of a frame?” To me, a frame is supposed to focus the eye on the art within. But I ask,”Can a frame be just as interesting as the artwork and not create a contentious relationship? We’ve all seen great paintings hanging in museums with spectacular frames, and I often find myself asking, “Does that frame help, or hurt the piece that it surrounds?” Most of the time the two are well paired, but, on rare occasions the two form a relationship that exceeds expectations. In my opinion, a great piece of art can withstand the challenge of a great frame, so long as the relationship of the two has been well negotiated.

I’ve tried my hand at making traditional frames, and to be honest, some were pretty bad. It’s not easy. So realizing that I was capable of making junk, I decided to march off in a new direction. “Where was I going and what would I come up with?”

I enjoy the impressionist period and have spent the last few years reading about Gustav Klimt’s life. While reading I came across his story telling portrait, Judith I, which consists of oil paints and gold leaf. The frame is simple, but the top is embellished with decorative metal which contributes to the overall story behind the painting. And what a story! The two are unique, but have this symbiotic relationship that works beautifully together. The thought of making something similar had occurred to me, but copying it wouldn’t be right. So I marched off in another direction.

Before you, are two attempts (creations, efforts, etc.) intending to explore the artwork/frame relationship. I was intrigued by Klimt’s use of gold leaf and so contacted my gilder friend Janine Lambers http://janinelambers.com  and asked her if she’d be interesting in collaborating on something totally different. So, being a lover of nature, I began poking around my gardens.

I’ve always enjoyed flowers, and irises are at the top of my list. I’ve grown them, photographed them and admired them. But for some reason, wasn’t able to capture their grandeur. Maybe because my images were too literal and I needed to express them in a more artful fashion.

The drawing for this piece took just a few moments to create. It was yearning to come out. I showed it to Janine and asked if the irises could have some dimension and she said, “Of course they could.” So I left the panel in her capable hands and she proceeded to “build up” the flowers with gesso before applying her clay and gold leaf. I really love what she did. Each flower has this wonderful little lilt to them and appear to be dancing in the wind. They are so expressive!

I, on the other hand, began the adventure of creating a new kind of frame. So I brought four pieces of black walnut together, mitered their connections, and add splines in the joints to increase their strength. Then did some undercutting on the back side, which gave the impression the frame was floating, as well as the front, which allowed the panel to nestle within the four sides without being crowded. The holes of the lattice were roughed-out using a large diameter drill bit and then refined using a Dremel tool. After hours of sanding with ever finer emory cloth, the frame was ready for finishing.

And then the momentous day came. The two elements were brought together for the first time: “Gold Panel….. meet Walnut Frame.” I was just blown away by Janine’s work and had to keep telling myself that this piece was really mine!

Janine and I agreed to barter our skills. She too received a panel and a frame.

In her case, she asked that the holes simply be drilled and sanded. Then she would gild the interior surfaces while leaving the face of the walnut its natural color. And so that is what we did. Janine says, “Gilding the insides of my walnut frame was an instantaneous feeling. The idea for an art piece however, took a little longer. The organic forms of the frame led me to use it horizontally – which in framing is also known as a landscape. After some time reflecting upon the frame, I decided to create a water color landscape with an over layer of silver, which represents rain.”

“Stretching traditional gilding within new design is a way of bridging the past with the present. I am trying to achieve this in my own work and that is why I gladly participated in Mark’s project.”