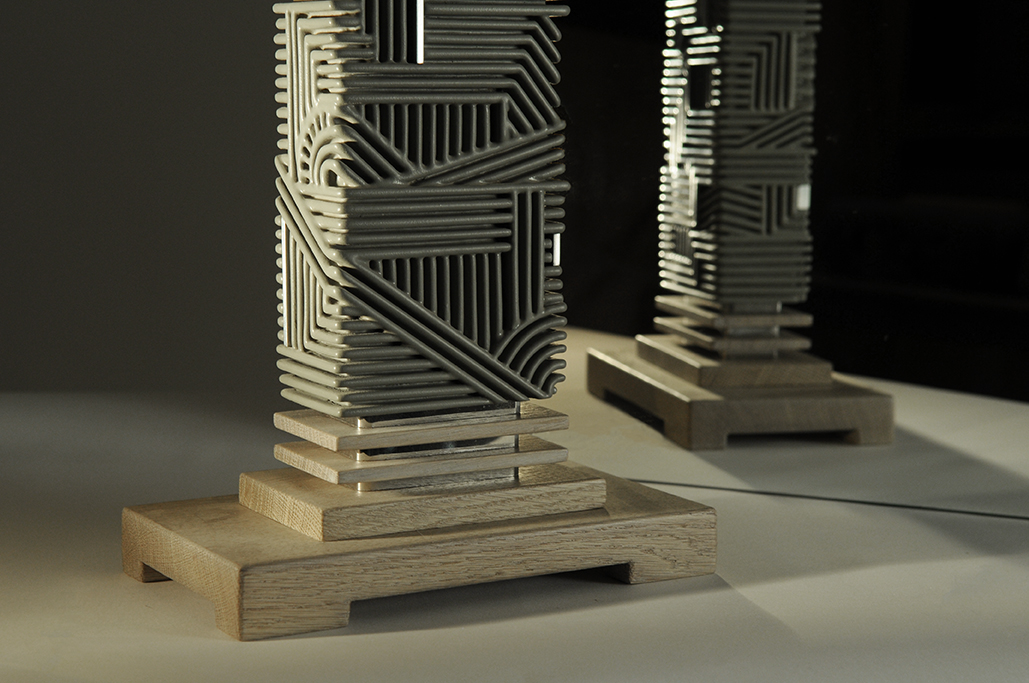 Imagination is a wonderful thing. Ideas constantly swim in and out of my head. Most usually fade away after a day or two, but once in a while, one will persist. And if it does, then I begin to ask myself, “Would building it be worth my time and effort?” As in the case of my Khaki Industrial Lamp, it was a quick “Yes.” I knew it had to be built.

Interestingly, because I’ve been creating my own ideas for the past 10 years, I’ve come to understand a little something about myself. My inspirations typically arise from one of three camps: One that wants to showcase the Beauty of the Wood, as in my deco foyer table. One that emphasizes Color and Finish, like my buffed up yellow school bus. Or the third that focuses on the Structure and Proportion of a piece.

I can’t say what inspired my Khaki Industrial Lamp, but I know it came from the “Structure” department. Maybe I was thinking about old fashioned radiators, or had visions of circuit boards, or saw a photo of the George Pompidou Center in Paris. Whatever it was, I immediately “saw” my Khaki Industrial Lamp and felt the need to create stacks of parallel lines. So I quickly sketched something up.

The real challenge, however, would come later and that had to do with the finish. What would the piece look like?

If you have been watching my previous posts, my Khaki Industrial Lamp is based on the design for my Yellow Art Deco Lamp. The proportions are the same, yet the simple glossy form has been replaced by thin strips of wood closely following my inspirational drawing – at least on the front side. As the pattern wrapped around the sides, it seemed to take on a life of its own.

Finding the Finish for My Khaki Industrial Lamp

All along, I knew I didn’t want this piece to look like wood, but instead like something that had emerged from a mold as a cast piece. So I relied on the thick primer to “goo things up.” It filled the nooks and crannies, rounded the corners and smoothed out the imperfections.

At times, too much primer built-up in the corners, so it was necessary to scrape it out with my X-acto knife. A slow, but necessary process that eventually prepared me for the last step. Deciding on a color.

Should it be white? Or maybe navy, or something else? Whatever it was, it had to compliment the polished stainless rings I wanted to use.

Stymied, I found myself lurching from one idea to another.  Back and forth. I went so far as to “flip my thinking” and envision my Khaki Industrial lamp as an old rusty radiator with bronze accents. But that didn’t pan out, so I went back to my original idea. It was only after a long pa

I had been making a bunch of gray oak samples for another project, but never considered them as a possibility for my Khaki Industrial Lamp.  It wasn’t until I sprayed my commissioned piece, did I “see” the khaki color and thought of combining it with the grayed-out white oak and the polished stainless steel.  And so that’s how the finish came to be.

Creating a Shade for my Khaki Industrial Lamp

You’d think plopping a lamp shade on a custom piece would be a simple process, but it wasn’t. Both my yellow art deco lamp and my khaki industrial lamp were created at about the same time and thinking that any old shade would work, was an erroneous belief!

I’ve worked with custom shade makers before and appreciate their guidance when creating something new and different, but I have to admit, the solutions they offered this time around weren’t all that different. Nor did they compliment my lamps. Too many silks, cottons and rayons. Everything looked the same!

Back in the shop, I tried to create some magic by pairing-up some upholstery fabrics with my yellow art deco lamp, but nothing seemed to come of it.

Out of frustration I said to myself, “It’s time to ditch the traditional and start fresh.” After all, these were art deco lamps, why not have deco inspired shades? So I drew a couple of options and then made a cardboard version to see what it would actually look like. Pretty radical I thought.

The last step was to make one out of wood, which took a little bit of doing. The first attempt was too small and needed to be revised. The second one was more successful, so I stained it to match the lamp’s woodwork and then lined it with vellum. Well, it’s different.

Can’t say I’m totally sold on it, so I’m working on a simpler version with a metal frame and covered with a linen material that I think will succeed. We’ll see.