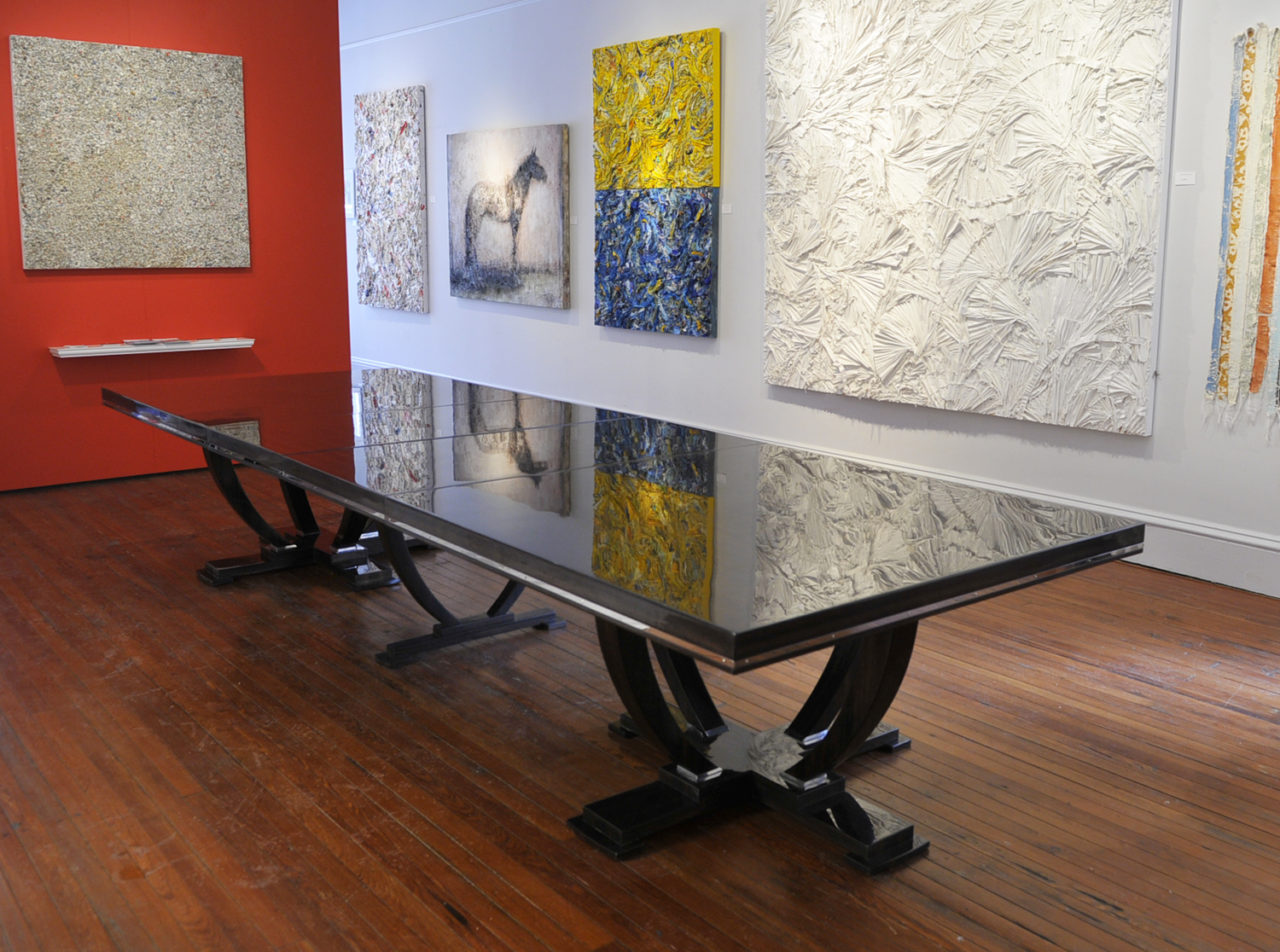 I have to admit, I have a lot of fortune in my life. In the spring of 2016, I was asked by a designer to create a Macassar Ebony Dining Table for her Park Avenue client in New York City. In reality, it was really two tables that could be joined by adding a couple of center leaves to make one large table for family and friends.

At the beginning, the client requested a starburst pattern, but after presenting several options, I encouraged her to go with a more traditional “frame within a frame” pattern using Macassar ebony. I thought this would be the best solution and maintain its appeal for the years to come.

Building the Bases for my Macassar Ebony Dining Table

The bases were challenging to design, because so many possibilities existed. Eventually we agreed on a four legged option sitting on a criss-cross base.

Work began during the summer when I asked my veneer supplier in Queens to produce the tops and extra table leaves. By October, I the tackled the most challenging aspect of the project, cutting out the curved legs which consisted of multiple layers of solid maple.

Once completed, they were veneered with black walnut and then topped with a layer of ebony. It was a slow process because the work was done by hand. Each leg was then permanently mounted to the base and then the bases were veneered, in the same slow moving process.

The real fun began when I had to entertain the two extra table leaves. Somehow the extra leaves needed to fit tightly between the two tables without moving the bases. The only way to achieve this was to have the tops slide back and forth when needed. The solution worked beautifully!

When the designer and I began this project, we quickly noticed that the client had a dislike for veneers that were “too” red. This posed a bit of a problem because Macassar ebony is traditionally know for its rusty red and dark brown character. So when it came time to finish the tables, I decided to “tone down” the red by brushing in a bit of black stain. The effect reduced the contrast and “quieted down” the overall pattern.

In the coming days, the tables and their components were sprayed with several coats of polyester resin. I sanded relentlessly between each coat so as to level the finish. After seven coats of resin, I felt I had enough material on the tops to buff them out and create a high gloss finish! As you can see, the results were impressive.

The last chapter of this story involved photography. I didn’t have enough space in my shop, nor a suitable background, so I thought about a gallery I had been in several months earlier. The artist, Jeffery Terrison, displays his textural paintings which are pretty cool (http://bedfordfinearts.com). So I asked him if I could bring my tables into his space and photograph them surrounded by art. Without a moment’s hesitation, he said “Sure.”

His capable gallery manager, Julia, and I set a date in February, but as the day approached we noticed a strong snowstorm coming up the coast, so I postponed a day. I’m glad I did, because we dumped on.

As I walked home that night in the white stuff, I wondered how was I going to get a rental truck into my parking lot? As fortune would have it, I saw a neighbor and asked him if he could do me a favor and plow out my parking lot. He too, responded without hesitation and 15 minutes later, the task was done. I thought, “Man I have a lot of fortune!”

The following week, my trusty assistant and I, delivered the tables to the city and set them up. As we unwrapped in the kitchen, I could hear “little whispers” coming from the the client and designer who were in the dining room. It was kinda funny, but also a bit nerve wracking because I couldn’t hear exactly what they were saying. This is the moment of truth. Will they like it or not?

Once everything was in place, the two said the results were gorgeous and were very thankful for my efforts.