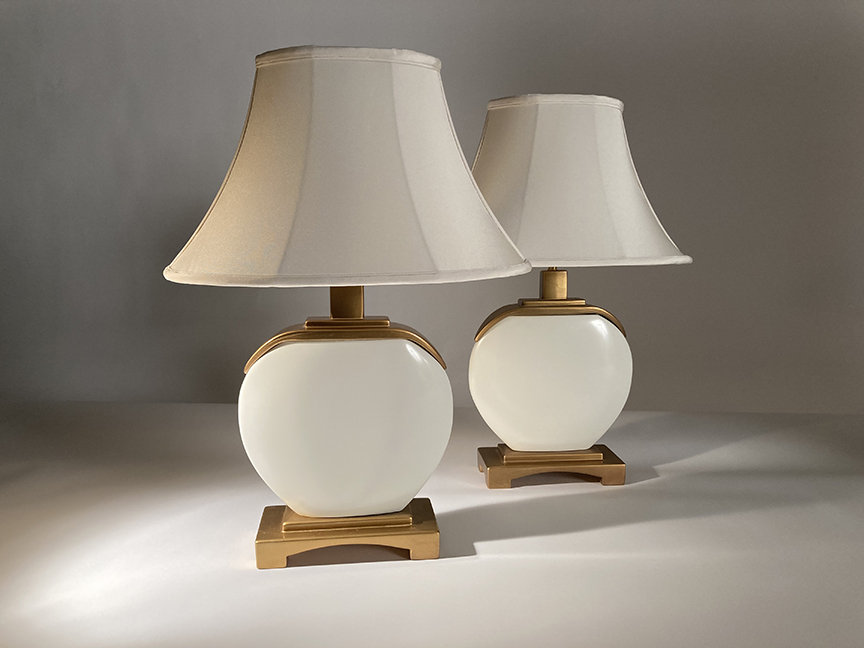 First One, And Now There Are Two.

Three years ago,  when I did the Architectural Digest Design Show The Architectural Digest Design Show Has Come my Perfume Bottle Lamp A New Direction received a lot of attention.   People loved the smooth white surface and thought it was porcelain.  They enthusiastically commented on its thinness and said,  “Perfect for a New York City apartment.”  But I have to admit, it’s a bit large and commands quite a bit of attention.  Maybe too much.

So, at the behest of a visitor, I decided to make a pair of Miniature Perfume Bottle Lamps. They could be used almost anywhere: Night Stands, End Tables, Etc. Their diminutive nature adds a bit of elegance to a space yet doesn’t shout, “Look at us!”  Perfect for the homeowner who is seeking something different.

How Did I Make My Miniature Perfume Bottle Lamps?

Just like their big brother, the bases were cut from solid blocks of hard mahogany and then sprayed with a lacquer/bronzing powder finish. The gold colored caps were created by laminating several layers of veneer, while being held in place on the lamp’s body. The resulting “blocks” were trimmed and sanded to create the final forms and then finished like the bases.

The bodies were made of medium density fiberboard – MDF.  A material that is easily shaped and takes a finish well. The white porcelain finish came to life after a dozen or so coats of lacquer were applied. Only then, was there enough material on the surface so the lacquer could be buffed to a glossy porcelain-like finish.

As for the shades, I returned to the same manufacturer, Oriental Lamp Shade Co. and asked them to create smaller shades for my Miniature Perfume Bottle Lamps.  Of course their efforts looked great and I’m very happy with them.