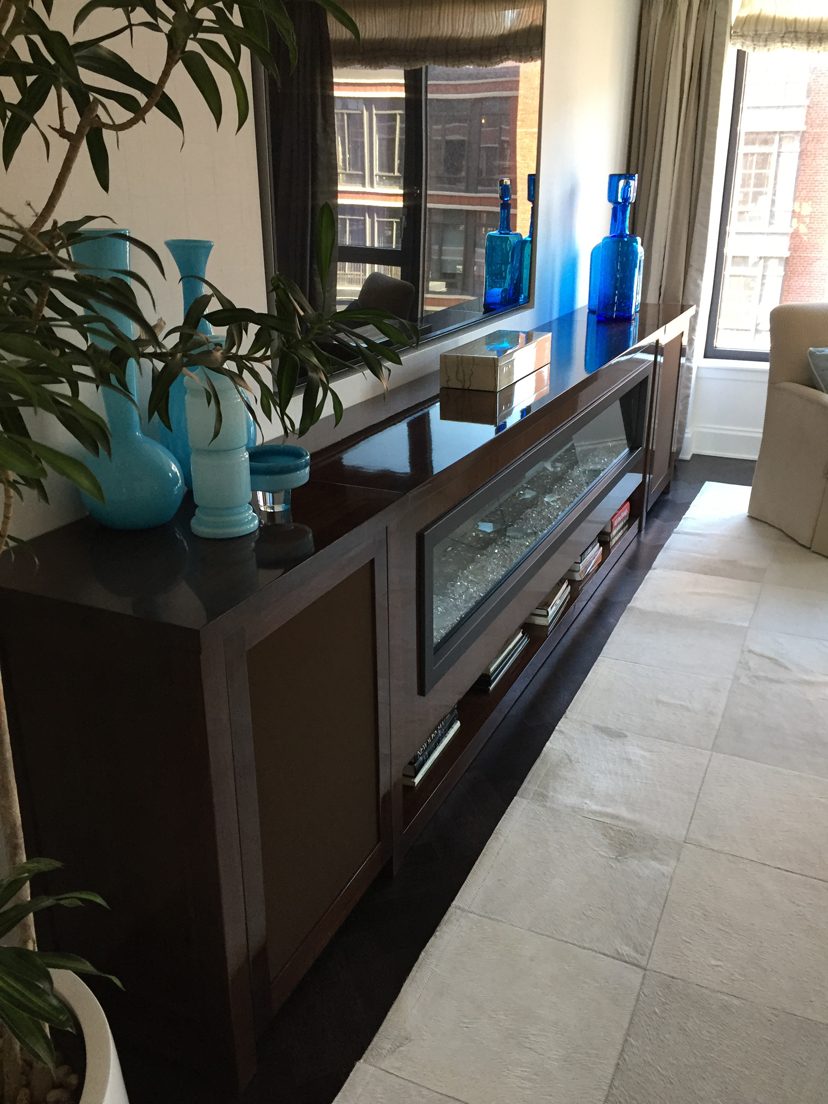 Two years ago I had the pleasure of working with a new homeowner through my colleague, Penny Drue Baird http://PennyDrueBaird.com. This gentleman was setting up his modern living in West Chelsea just off of Seventh Avenue, and being that he is in real estate, he knew what he was doing when he picked this sun drenched location. The entire south side is all windows!

I was asked to build three pieces: An entertainment piece, a desk and a built-in credenza for the bedroom.

Of the three pieces, the black walnut entertainment unit was the most challenging because I had to hide all of the homeowner’s stereo equipment along with some Apple television components within, and show off his oversized digital fireplace in the center. I must have tried half a dozen layouts before I got everything to fit. But this was only half the battle

Once in the residence, the piece needed to be assembled and sit up against the wall as a stationary piece, “but how were the audio guys going to get to the back to make their wire connections?” It became apparent that this entire black walnut piece needed to be on wheels. And so that’s what I did. As it turns out, the audio guys were present when I delivered the piece and together, we made the necessary minor adjustments that they needed to simplify their task. They were very appreciative.

The White Oak and Bronze Desk

The second piece was a white oak and bronze desk for the home office. The inspiration for this piece came from someone else’s design, but I custom tailored it to fit the client’s needs and the room’s color scheme. The top was made of white oak and a small compartment was created at the back to hid a power strip and all the wire connections. The main power cord was snaked through one of the bronze clad legs and off to the wall outlet. The desk had to be assembled onsite.

As a side note, while assembling the piece, the client took a front row seat on a sofa and watched as I fought to pull the power strip cord through the leg, around a bend or two and into the desktop. It wasn’t going well and the wire was putting up quite a battle. After a few minutes, the client asked, “Do you ever lose?” And I responded “Never. I promised you that I’d hide the wire in the leg and I’m going to deliver.” It was just a matter of time, and in the end, I won!

The last piece, which actually went in first, was the built-in clothing credenza for the client’s bedroom. This piece was made out of wire brushed rift white oak. The entire piece was built in my Beacon, NY workshop, finished with a two tone paint and stain combination and then delivered in pieces. The main cabinet was easily installed, but the top had to be custom trimmed to fit the space. Not an easy task, being that the faux leather wall coverings were already in place. But relying on experience and a lot of patience, the top eased into position without marring the wall coverings.

As a final note, I heard by way of the designer, that the client really appreciated my skills, my attention to detail and willingness to deliver what I promised.