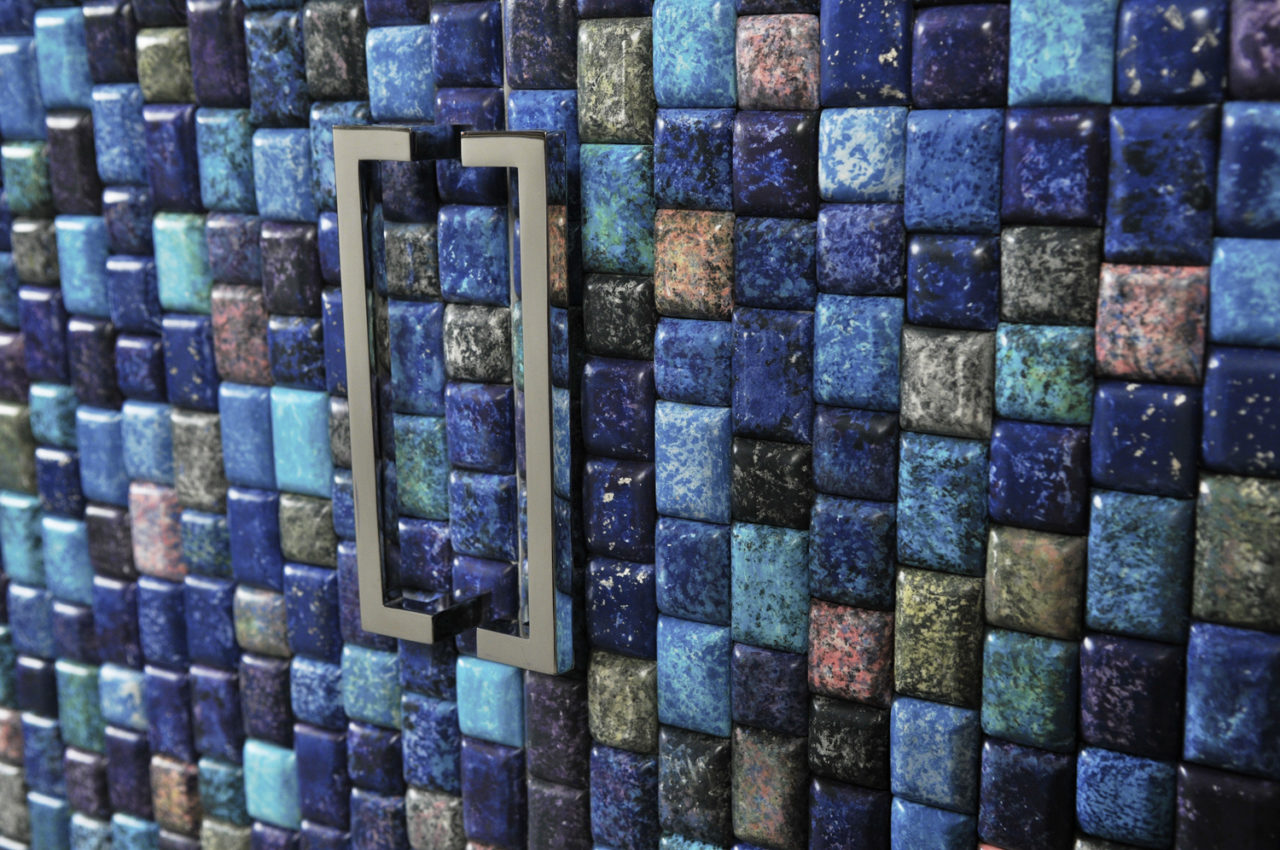 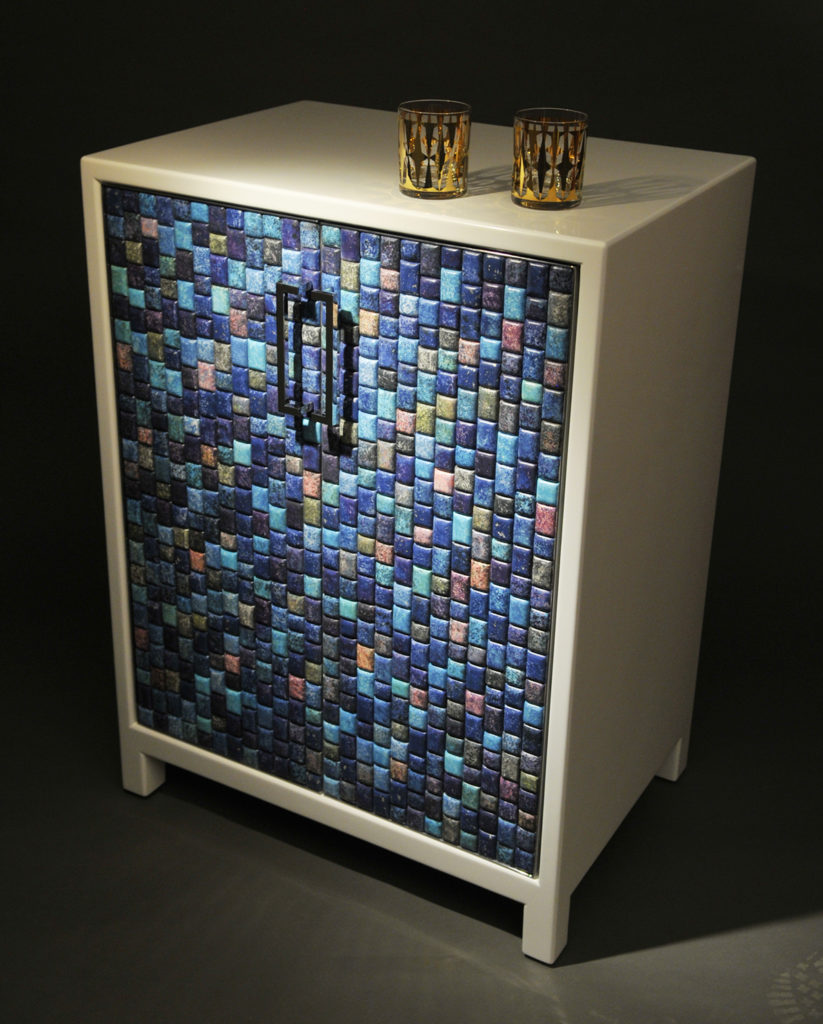 Inspiration for My Mosaic Tile Cabinet

The inspiration for my mosaic tile cabinet came while sitting in slow traffic on the Queensboro Bridge heading into Manhattan.  I had a chance to study the elegance of the United Nations building and noticed it’s white exterior “framing” the stacks and stacks of mottled green windows.  As someone who’s intrigued by structure, I often wonder if the design elements of a building, like the UN tower, could be scaled down and re-imagined on a piece of furniture. What would it look like and would it be pleasing to the eye?

Another Source of Inspiration

Thinking about this project, I found it necessary to expand my search and consider other buildings. Thankfully, there’s one on Milwaukee’s eastside that always attracted my eye. To us locals, we conveniently referred to it as the War Memorial.  The city wanted to remember those who served our country by creating a public space with an extensive art collection and so engaged the Finnish architect Eliel Saarinen and later on, his son Eero. It was meant to be a living memorial to “Honor the Dead and Serve the Living.”

As a kid, I studied it closely.  The four-sided cantilevered building appeared to “float” on mighty stilts, with the ever changing Lake Michigan in the background.  I thought it was so cool! 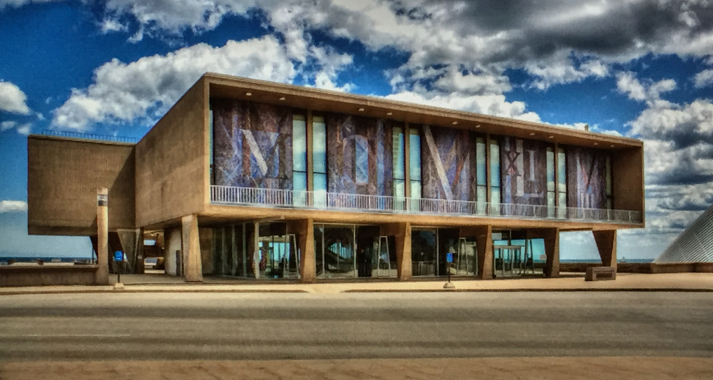 It was only much later in life, that I looked into the story behind the mosaics adorning the upper facade. The younger Saarinen tabbed Milwaukee artist Edmund D. Lewandowski for the task of ornamenting the most visible side facing Memorial Drive. Thousands of purple, blue and lavender tiles spell out the beginning and ending dates of World War II and the Korean Conflict in large Roman Numerals. So I think you know where I’m going with this. I simply merged the qualities of the UN’s exterior with the decorations of the War Memorial to create my mosaic tile cabinet.

I had a pretty good idea of what my mosaic tile cabinet should look like: Something glossy white with tiled doors and polished stainless steel accents. So I quickly put pen to paper and drew a small cabinet and shared it with my clients, who I met at the 2018 Architectural Digest Design Show http://ADDesignShow.com.. They enjoyed my ideas and gave me free reign to create the liquor cabinet they were seeking.

I began by creating a small mock-up of the mosaic door for review, but my first attempt was too dark. So I brightened up the colors and sent the second sample to my clients which they accepted.

So, as you can tell, the story is mainly about the tiles. Over five hundred were cut, shaped and lacquered by hand using small pieces of sea sponges.  Some even received small pieces of silver leaf to create a faux lapis lazuli appearance.

Once my colorful babies were finished, a very specific recipe was used to arrange them.  Not only did each vertical column have to be the same length, but a certain randomness was needed.  So you can imagine the re-arranging that took place before they were set in place.   Then, to enhance their appearance and add a bit of sparkle, the doors received a band of polished stainless steel edging. 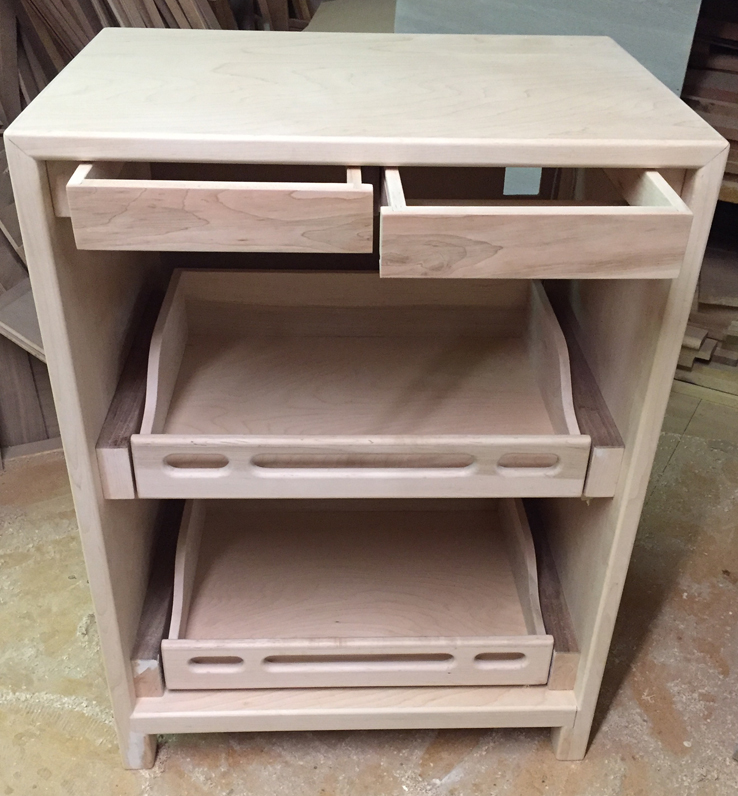 Because “everything had to fit just so,” it was necessary to complete the doors and then establish the cabinet’s final dimensions. With these figures, I was then able to produce shop drawings and build the cabinet. Compared to the doors, this was easy. Though, the pull-out trays were a  bit more involved being that I wanted them to have this “molded” appearance.  So they were repeatedly sanded and primed before they were ready for the next step.

Applying the white polyester finish was kind of tricky because it had a tendency to run and create annoying drips. So each surface had to be laid flat and sprayed like a table top, which certainly slowed things down. In all, it took about two weeks to complete.  Then the power tools came out and the piece was buffed to a high gloss.

I just love when liquor bottles are illuminated.  Everything just comes to life. The sparkle, the reflections, etc. And, in this case, it just took was a little extra planning. Everything was hidden, so the interior is totally clean. As an added bonus, I purchase a hand held remote so my clients could operate the lighting from anywhere within the apartment. They really liked this feature.

And so my mosaic tile cabinet now sits in my clients’ home, along with several other artistic pieces of furniture, all of which are “set off” by the dark teal walls of their study.

A couple of days after I made my delivery, I received a nice note from the client saying, “Mark, the more I sit and look at this piece, the more incredible details I notice. It’s exquisite. As you repeatedly said, the polished steel around the doors is a crucial aspect, while hardly there. I love how the top screws were tightened to a perfect cross and not randomly.  The speckles on the tiles… I think I could spend months discovering new things about this piece.  Thank you again!”