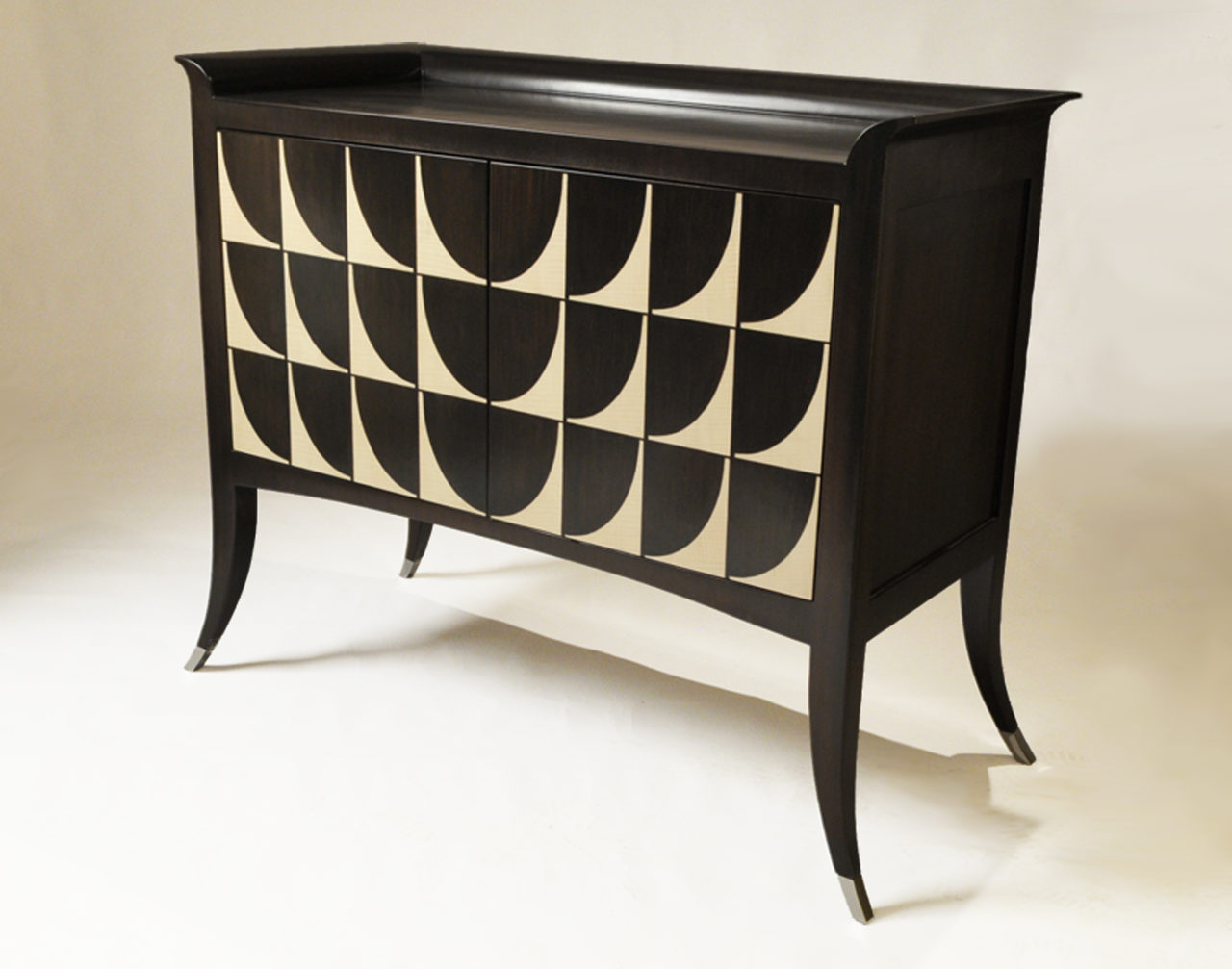 It wasn’t long after I turned 50 that I realized 70 was coming up fast. “It’s time to get busy, and express your creativity,” I thought. This small harlequin cabinet is the result of my efforts.

It all started with a desire to play with bold patterns of veneer, otherwise known as parquetry. So I picked up my pen and drew a few shapes. I love playing with curves and thought it would be stunning if I married the pale blond veneer of english sycamore to the dark richness of black walnut in matching squares or rectangles….. And then doing it over and over again.

But before anything could be built, it was necessary to transfer my drawings to the computer, where I fooled around with the proportions. Pushing and pulling them, I began by establishing a cabinet size and then focusing on the door’s veneer layout; Four pairs wide and three tall “looked like the ticket” as my father would say. And then flipped the pattern over for the opposite door. It took a couple of attempts, but now it was time to build.

If you look closely, you’ll see that the walnut grain runs vertically on this piece, with the exception of the top. Not a big deal if it’s a simple rectangular cabinet, but in this case, the curved rim added an extra challenge. The rim is made of solid wood, such that it could be shaped and then veneered for a more consistent appearance. Solid wood, however, expands and contracts with the seasons and can crack during the dry winter months. So each rim piece was “hollowed out” to address this potential problem and sat on top of a horizontal rail that joined the legs. It took a little doing, but I was able to bring the entire piece together the old fashioned way, by using mortise and tenon joints and a little glue.

Then I built and hung the doors making sure they fit prior to finalizing my harlequin layout.

I made a pair of complementary shapes out of masonite that served as cutting jigs for the veneer: One for the walnut and one for the sycamore. You may notice that each walnut piece has a small “tab” on both ends which separates each sycamore piece from its neighbors. Obviously, this detail made it more challenging to create the harlequin pattern, but I thought it added some interest. Cutting out the rough shapes only took a couple of hours, but refining the seams between each pair, took several nights to perfect.

Before the pairs could be joined, however, the walnut needed to be dyed, stained and sealed. I couldn’t take a chance that the dark colorant would “bleed” into the sycamore. Once done, the pairs were taped together into two large sheets and then carefully mounted to each door. After a day in the veneer press, each was removed and big smile appeared on my face as I saw that everything lined up!

What to do with the Inside?

The outside looked great, but “what was I going to do with the inside?” When the doors were open, it looked like the giant maw of a large cavern. So I decided on some pull-out trays which slid in and out on some “Old School” wood runners which I dreamed up.

My initial ideas for these trays were simple, but nothing to write home about, yet I wanted them to be special. So I gave them curved corners and then added strips of sycamore to the front edges. I really like the way they turned out.

By now, you’d think I was in the home stretch. But a piece like this really isn’t finished until receives some bling. So I opted for some shiny sabots (toe caps) at the bottom of each leg and wrestled with some custom designed handles. I went through a number of options, mock-ups and two different metal fabricators before I had my finished pieces. In the end, the handles were too much so I just went with the sabots.

Once the legs were fine tuned to receive the sabots, I knew the project was coming to an end. The dying and staining process inched me closer to what I had envisioned almost two years earlier. But it was only when I applied the lacquer, did the true beauty of the black walnut reveal itself.

It’s so satisfying to see my ideas come to life and stand before me! It was a challenge, but worth the effort.