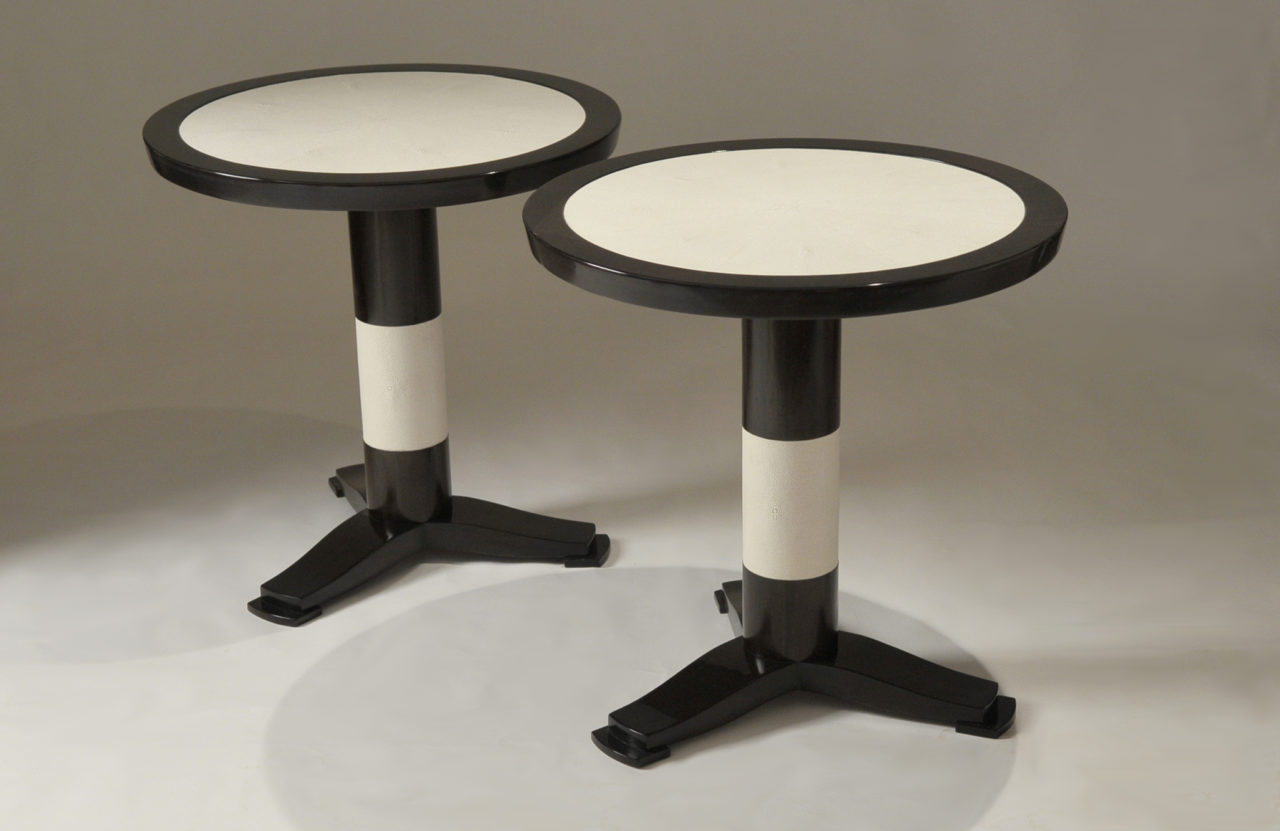 About a year ago, a designer friend of mine, sent me some photos of a pair of antique shagreen and walnut side tables. They were for sale by a reputable dealer, but the shagreen was stained and the wood was worn. The question was, “Could they be rehabilitated, and would it be cost effective?” Based on the asking price, apparently, not. So I was asked to create a duplicate pair of art deco tables.

So the designer and I when over the dimensions on the phone, I drew some preliminary drawings and then made one of my quintessential cardboard mock-ups. I took it to New York City and met with the Park Avenue homeowner where we discussed the proportions and made some minor adjustments. Mainly to the height of the “paper” shagreen collar: First up, then down. Then back up again. A bit tedious, but absolutely necessary.

When I received the go-ahead from the designer, I rallied the materials for the tops and bases, which were assembled in Beacon. The columns were turned in Brooklyn.

I enjoyed building the tops, first laminating two layers of ply together, adding some solid walnut edging and and then applying the black walnut veneer. At this point, they looked pretty sloppy, so I put my router on a swing arm, trimmed the outer edge and then removed the center area for the shagreen insert. The last of the mess was removed by my bandsaw which cut a nice clean edge. Pretty easy when you have the right tools.

The bases, however, were a bit more challenging. Each foot consisted of several layers of solid walnut that were laminated together and veneered to hid the seams. Not so bad. The challenge came, however, when I had to figure out how to unite the three individual feet into a unified base that could carry the weight of the table. It took a little thought, but I came up with a solution.

When the columns arrived in the shop, the three parts were assembled to confirm that everything fit. With a few minor adjustments, they were sent off to the finishing department at the other end of my shop.

The pieces looked quite nice, however, I found that the veneer on the tops had lifted in a couple of spots…… This was the last thing I needed. So I quickly sanded the veneer off and then re-applied it using a more vigorous solution. This time it worked, and in reality, they looked better the second time.

This is where Victor and Michelle of MHG Studio took over. They specialize in applying natural skins to a variety of surfaces. I took my pieces to their workspace in Greenpoint Brooklyn , and went over how the specially ordered shagreen would be applied. Two weeks later, I went back and retrieved them. Their work was beautiful and it was a pleasure working with them.

Now all I had to do was assemble the tables and drop my center disks into place. Then I was ready to deliver my shagreen and walnut side tables to the same Manhattan client who, also purchased two macassar ebony dining tables earlier in the year. Building a Macassar Ebony Dining Table. It’s nice to have repeat business.